“Thrice Upon A Time”

“LOVE, more awful painting! and more beautiful, because painting is all for love, spring 2012”

“MASATO KOBAYASHI – The Paint of the Planet”

“Masato Kobayashi A son of Paintimg”

“A Son of Painting”

“Thrice Upon A Time”, ShugoArts 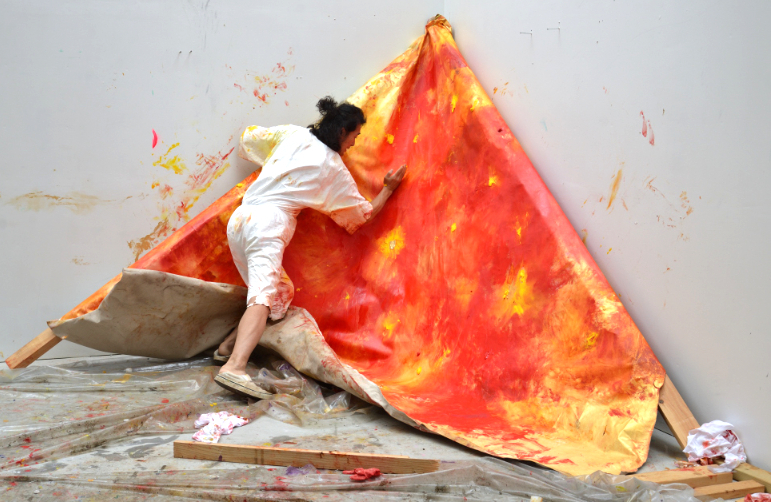 Thrice Upon A Time

"Thrice Upon a Time"
Beautiful light fills us with visceral pleasure, but something that looks like shit can also give us pleasure.
'Cause as we all know, beauty isn't just about the external qualities of a thing or a person. A lot of times the fact that a certain quality is contained in something or someone that looks like shit makes it even more beautiful. That goes for Duchamp's urinal, Warhol, van Gogh, Caravaggio, and Murakami. Because art isn't about something being better or worse.
That's why there's such a fine line. My utopia is always right there next to the border. Bad paintings are made by outlaws! I think of the paintings in Love, More Awful! But More Beautiful, Because Painting Is All for Love as a family of the planet. Like a family, they live together in a jumble – they're hanging on the wall, they're resting on the floor, there are angels, skies, apples, nudes, and abstract paintings…fragments of stars…family…it's a family of paintings! It's a family of this planet on the border of beauty and shit. And there are some horses out there on the plain. Laughter.
Once upon a time, twice upon a time, thrice upon a time… there was a cowboy and a cowgirl.

―― ―― ―― ――
Kobayashi Masato's works overflow with life, with the generative, rather than the destructive principle. It was in the mid-1980s, when he was in his 20s, that he arrived at a process of producing paintings that begins with stretching a canvas and ends when the canvas is stretched, a method that is logically possible, but difficult to realize in practical terms.
The young Kobayashi, having decided to be a painter and seeking for a new form of art, looking over the history of art from the Lascaux cave paintings to 20th-century Minimalism, which he had absorbed in university, and seeking a base on which to establish his own art, faced truths that were undeniable, inevitable, but daunting: "By the time you stretch a white canvas on stretcher bars and start painting on it, it's already too late to make something genuinely new", and "If you want to continue producing paintings of formal significance in the post-Minimalist art world, you must begin by pursuing an entirely new process".
Kobayashi came of age in an era when there was constant discussion of the history of modern art – from Impressionism, Cézanne, and Matisse through Pollock, Rothko, and the other American Abstract Expressionists, and their successors such as Newman and Stella, Minimalism and Conceptualism – and it was a common practice to refer to painting as "two-dimensional art" rather than "painting." He did not concern himself with Japanese avant-garde movements like Gutai, Jikken Kobo, and Mono-ha, or even with ukiyo-e or anything else, but in the solitude of his studio in Kunitachi, Tokyo arrived at an original approach which he carries on to this day.
It was more than 10 years later, in 1997, that Kobayashi moved to Europe at the instigation of the legendary curator Jan Hoet (1936-2014), and it was there that he first broke a cardinal rule of painting by placing his works on the floor and leaning them against the wall. Besides Jan Hoet, others who recognized his originality early on were fellow artists such as Cai Guo-Qiang, Kris Martin, and Sislej Xhafa. Having continued to exert an influence on younger artists since returning to Japan, Kobayashi can truly be called an "artist's artist."
The title of this exhibition, Thrice Upon A Time, is a tripling of the traditional beginning of children's stories, and it came to Kobayashi, a with deep emotional resonance, when he was looking back over his life thus far and his roots. Over the years he has forged fearlessly ahead with his art, driven by a mission transcending space and time. His work opens the new space occupied by ShugoArts.